Dan Beard Council is committed to recognizing the awards both Scouts and Scouters have earned, or have been nominated for, in a more consistent time-frame. Outlined in the Awards Process Sheet is the Awards Process created by the committee to ensure a timely response to all awarded nominations. The awards have been condensed into 4 distinct categories: Unit, District, Council, and National awards, given either monthly, annually, or a date specified by the recipient (once approval for award has been finalized). Awards to be considered can be found on the Awards Central page on scouting.org. Here you can find any award and their requirements and nomination form (if applicable). 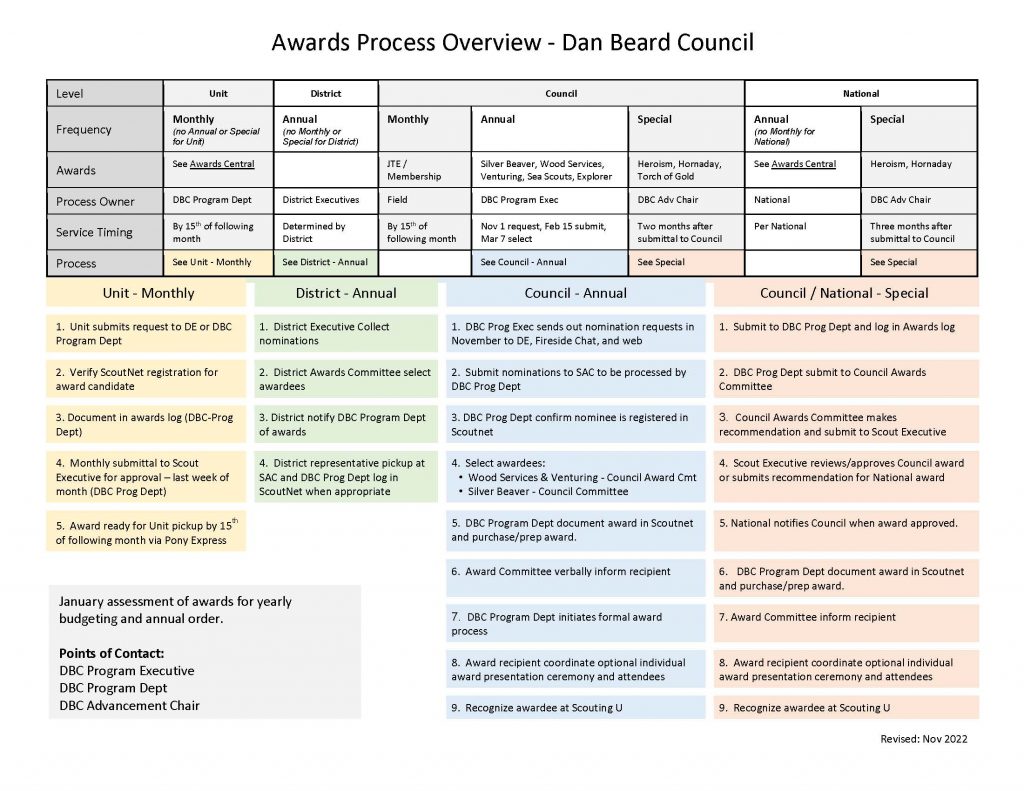 Monthly Awards: Units will submit their request to Michelle Byrne. During the last week of each month, monthly awards will be submitted to the Scout Executive for approval. Once approved, the award will be delivered to the unit by the 15th of the following month.

Special Awards: Nominations for these awards will be submitted to the Council Awards Committee to be determined whether the award is specific to Council or sent to National for consideration. Once confirmed by the Committee, the award will be sent to the Scout Executive for approval and awarded to the recipient by the Committee. These awards will be acknowledged at the annual Council Award and Recognition Luncheon at Scouting U later in the year.

This is where the most up-to-date information about BSA-affiliated awards may be found, including award applications and nomination forms. Click the button below to download a PDF.

Suggestions for Preparing an Award Nomination*

While each award nomination process is slightly different, the following are suggestions of documents to include in a nomination packet for a Scouting award. These suggestions are intended to provide background that will help the reviewing committee obtain the fullest background on the nominee as they consider the nomination. Without this kind of background, the reviewing committee is sometimes unable to properly consider a nomination and may be unable to support the recognition.

If you have any questions about the process for Awards, please contact the Program Director, Michelle Byrne at michelle.byrne@scouting.org.