Report to the Nation

Sean Nichols was selected by the National delegation to help deliver the Report to the Nation in Washington, D.C. to the President. 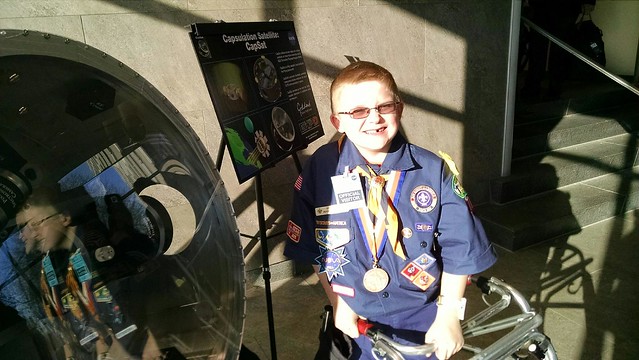 Sean is an 8 year old Cub Scout from Edgewood, Kentucky of Pack 3775 of the Dan Beard Council, headquartered in Cincinnati, Ohio. He joined the Scouts at six as a Tiger. During his short tenure as a Scout, he has earned 25 academic belt loops, 8 academic pins, 13 sports belt loops, 2 sports pins, and 16 other awards over his two years. He qualified for his NOVA Science award, the Outdoor Ethics Action award, Cyber Chip award, ScoutStrong award, the Light of Christ religious award, and just recently earned the Dr. Luis Alvarez Cub Scout Supernova Award.

Sean participates in several after school clubs at Villa Madonna Academy, including: Chess Club, Science Club, Jr. First LEGO League, and Destination Imagination. He also participates in CTRH’s adaptive horseback riding program and is one of the youngest members of the Cincinnati Dragons Youth Wheelchair Basketball Team. His goal when he completes school is to be a zoologist, because he loves to learn about animals.

As you can see from his activities at school and Scouts, he lets nothing hold him back, including transverse myelitis, a rare neuro-immune disorder that caused him a spinal cord injury as a baby. After being selected as the Transverse Myelitis Association’s 2015 poster child, Sean led a school-wide effort to raise funds to help other kids with the same disorder. He is a very spirited and determined Scout, following in the footsteps of his Eagle Scout father. His determination to succeed carries him through each day, allowing him to do what all youth at his age want to do—be active. He is truly ScoutStrong.