November 20, 2019 – In June, 1984, David Schaefer lost his high school class ring. He was washing his Jeep and did not want his ring to get greasy while washing the tires so David removed his ring and placed it around a hinge bolt on the hood of the Jeep. He finished washing the Jeep and forgot the ring was on the hood. A few hours later, after driving the Jeep around town, he remembered he left the ring on the hood but could not locate it around his driveway and realized his ring was gone.

Then, in September of 2019, David receives an email through Facebook Messenger from Joe House, who David did not know. Joe, an Eagle Scout from Troop 974 of the West Chester Nazarene Church in West Chester, Ohio, asked David if he lost something and asked about when he graduated high school, which Joe matched up by using Facebook searches and the ring’s engraving. David remembered losing his ring and was very surprised that Joe found this item after 35 years. 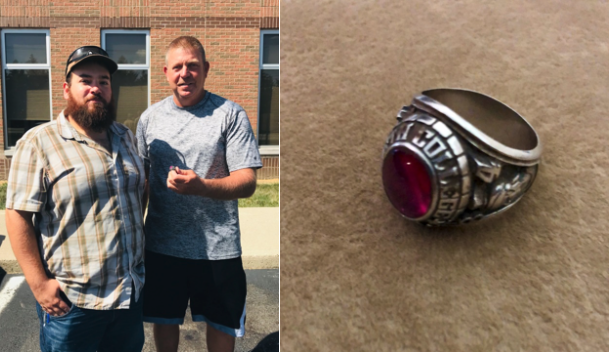 Joe House a college student studying Forestry, was working as a landscaper for T.R. Gear Landscaping this summer. While landscaping on the property of Wendy’s Restaurant at the corner of Winton and West Galbraith Road, he found a ring laying in the dirt. Joe remembered the Boy Scouts of America slogan, “Do a good turn daily,” and decided to find the owner of the ring so he can return it to them. Inside the ring was an inscribed name. With this information, and the details on the ring, Joe started searching the internet and social media pages in an attempt to locate the owner. Finally, Joe located David Schaefer, noticed he went to North College Hill High School, and private messaged him telling David that he might have found something that belongs to him. When Joe House realized that he has the right guy, they decided to set up a time to meet so he can personally return the ring, and David can thank him in person. They both were amazed that after 35 years, the ring was sitting there at Wendy’s, untouched, waiting to be found and delivered back to it’s rightful owner.

On Sunday, September 22, 2019, Joe was in town from college and had the opportunity to meet David to return the class ring that he had lost 35 years ago. David Schaefer, the Chief of Police for the Madeira Police Department, was able to thank Joe in person for this good deed and wanted to commend him for doing the right thing. David, along with the Dan Beard Council, Boy Scouts of America, would like to thank Joe House for demonstrating excellent mentoring and leadership skills which are all examples of the impact of Scouting. Thank you for upholding the true meaning of being an Eagle Scout and continuing to do a Good Turn daily by helping others!