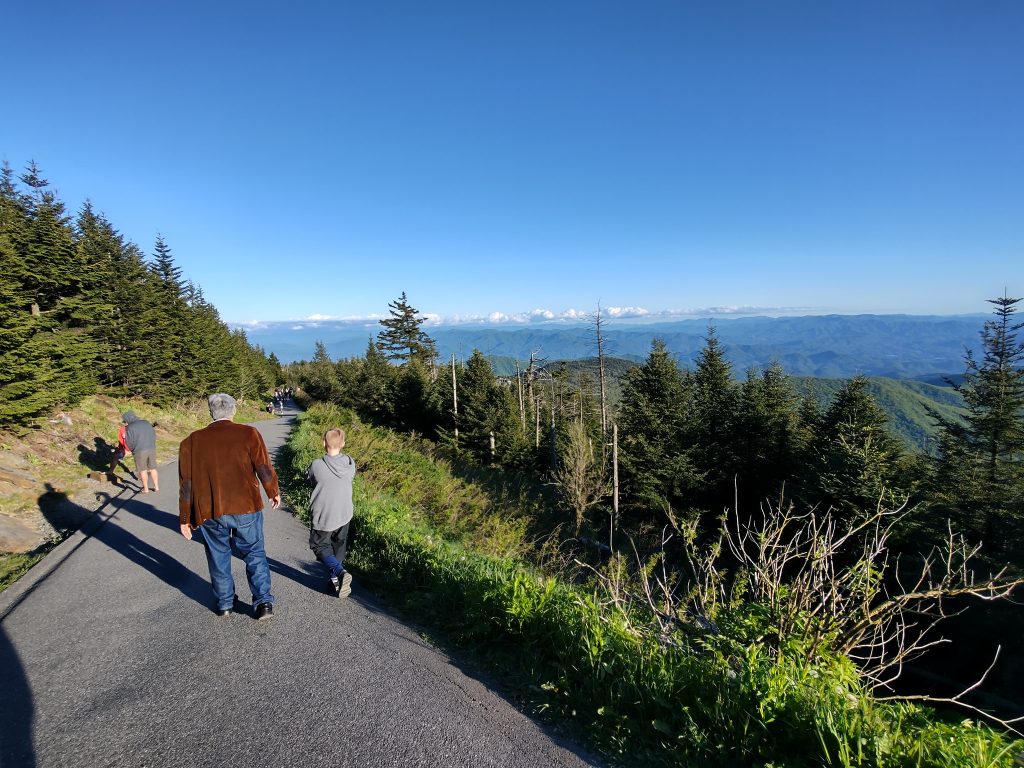 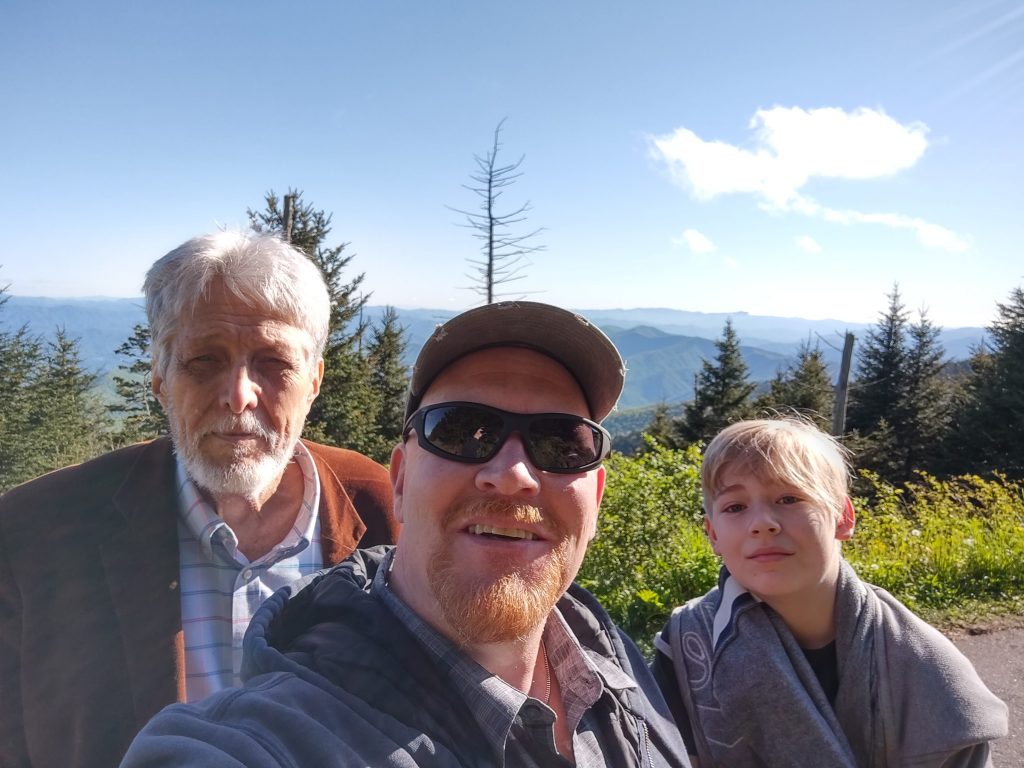 Going the Extra Mile – Local Scout Goes Out of his Way on a Hike to the Top!

June 18, 2021 (Mariemont, Ohio) – A Scout is Helpful, Friendly, Courteous and Kind. Local Dan Beard Council, BSA Scout A.J. Blevins from Troop 149 of the Mariemont Kiwanis in Mariemont, Ohio recently took a Memorial Day weekend family trip with his father, Adam Blevins, to Smokey Mountains National Park. As they were heading up the steep half-mile climb to Clingman’s Dome on their way to the overlook at the top of the mountain, they noticed an elderly gentleman walking at a slow and wobbly pace. Realizing that this gentleman was alone through the crowds, AJ and Adam asked if he needed any help.

He mentioned that his plan was to continue up the climb slow and steady. Taking a break with this gentleman, who rested on a bench that was off to the side of the path, A.J. and Adam learned his name was Dave, was 69 years old and hadn’t been to the top of Clingman’s Dome since he was 8 years old on a trip with his parents and little sister. A.J., being a helpful, friendly and courteous Scout, asked Dave if they would walk with them. Dave, after quickly objecting due to his slow pace and the fact that he may not be able to get to the top, agreed after Adam mentioned they are in no hurry.

After starting back onto the path to the overlook, A.J. and Adam joined Dave in conversation learning that Dave was dressed up in casual business attire due to being in town for a Christian music concert and drove over to Clingman’s Dome during a break in the program. His initial plan was to just take a drive but decided to go further as he got closer and then after stopping to take a look, decided to just try and walk up to the overlook.

A.J. and Adam felt that if they could just get him to continue talking and walking, he could make it as they wanted him to be able to see the top after so long. Dave talked about his church, his strong religious beliefs and cried talking about the natural beauty around us and the wonders of God. A.J. talked with Dave about being a Scout, the Orion Patrol Leader in his Troop and how he is hopeful to become Troop Guide in the near future. Dave mentioned that he himself was a Life Scout, stopping just short of making Eagle rank. A.J. and Dave connected by sharing stories about their Boy Scout troops, forgetting about the distance in front of them. The three of them took many small breaks, taking 50-100 feet at a time, as A.J. and Adam were determined to assist Dave reach the top.

The three of them passed by a few hikers from the Appalachian Trail at a point that intersected their trail. Their faces were tired and feet dirty, but their eyes were bright with anticipation as they pressed up the hill toward Clingman’s Dome, the highest point in this part of the Appalachian Trail. Dave asked every person descending how close we were to the top. Everyone told him, “You’re almost there! Just around the next corner.” Dave looked at Adam and said, “I think they are lying, but I’m glad!”

Eventually, after a few more short breaks and around a couple more corners, there it was… the observation tower. Dave, overcome with emotion, said that it was a miracle and he never thought he would make it to the top. He exclaimed that he couldn’t wait to tell people he had made it. A.J., Adam and Dave took several photos together to celebrate this moment. Dave was smiling from ear-to-ear.

Again A.J., being a helpful Scout, assisted Dave up the ramp by offering his shoulders for support. Dave mentioned he was afraid of falling because he had an autoimmune disease that affected his spine and nervous system. After the long rebuilding therapy, the last thing he wanted was to injure himself again and have to go through that again. Doctors instructed Dave to be cautious and not to fall. Moving slowly, the group made their way up to the observation tower. Despite being winded and sore, Dave was really excited and hanging in there, taking it little by little.

At the top of the observation tower, Dave began quoting scripture about God giving wings. He said that is how he felt up there, above the clouds. He graciously thanked Adam and A.J. and shed some more tears. While Dave was taking photos, Adam went over to A.J. who was enjoying the view. A.J. looked around at the cloud banks and mountains all around them and said, “This place is amazing!”

On the descent, which went more quickly, A.J. and Dave chatted about how natural beauty like this couldn’t be random as they now chatted like old friends. After nearing the bottom and exchanging contact information so they can swap photos of their adventure, Adam, A.J. and Dave realized they have additional things in common. Dave mentioned he was from Carbondale–just 45 minutes away from Adam’s best friend. Mentioning that Adam and A.J. are from Cincinnati, Dave shared that he has a good friend who is a professor at NKU. What a small world!

Getting back to the parking lot, Adam and A.J. realized that Dave parked right next to them. The two introduced Dave to their family who were waiting for them at the bottom. Dave was very grateful to meet everyone and was happy to tell everyone about their little adventure, saying what a miracle it was. Both parties have plans to meet up on Dave’s next trip to Cincinnati.

A.J. showed the true meaning of what it means to be a Scout. He was kind, patient, polite and genuinely enjoyed the moments that he had helping Dave that day. After Adam and A.J.’s family vacation to Gatlinburg, Norris Lake and Great Smokey Mountains, A.J.’s mom asked what the best part of his family weekend was. A.J. proudly exclaimed that it was meeting Dave and climbing Clingman’s Dome.

Special thank you to Adam and A.J. for sharing this wonderful and heartwarming story of the true character of Scouts. A Scout is helpful, friendly, courteous and kind and A.J. excelled at demonstrating all of those and more during this wonderful experience.