“Looking back now finding the tree was the easy part” 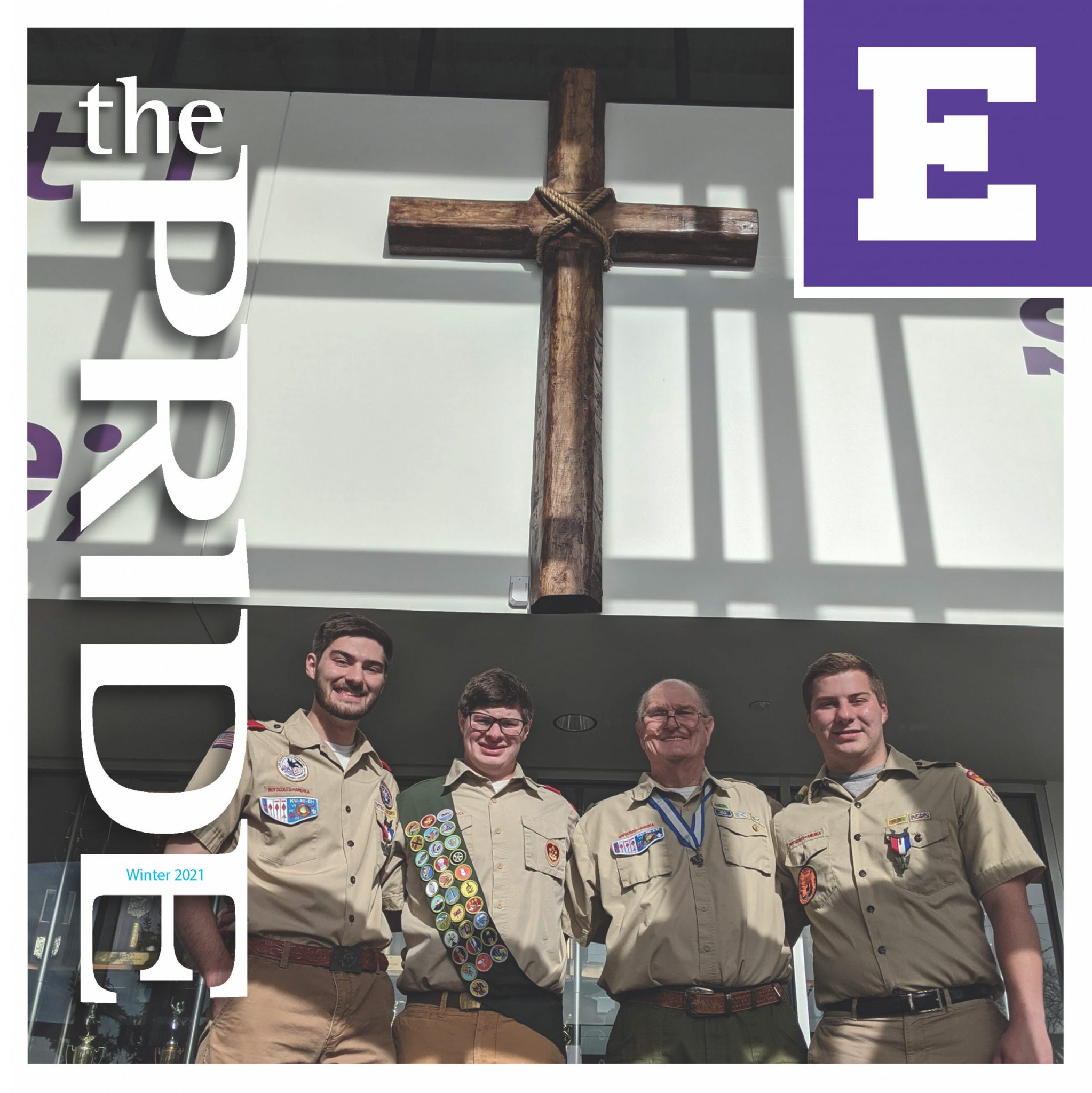 To say scouting is in their blood would be an understatement. With over 40 years in scouting and almost 50 Eagle Scout projects in which he assisted, it was no surprise that Don Wetterer made sure his three grandsons – Stephen ‘16, Matt ‘19 and Nick ’21 Comarata, were introduced to scouting as soon as they could walk. “While they attended different campouts, summer camps, and meetings with me over the years,” said Wetterer, “I am very proud that they followed through to achieve Eagle Scout, each pushing the other to make sure they got it done.”

Both Matt and Stephen went back to their grade school, Our Lady of Lourdes, for their Eagle Scout projects. Stephen’s project was to build spectator benches for the t-ball field behind the school. Steve saw a need for benches so that people could have a place to sit when watching their kids or grand-kids play t-ball. Matt’s project was an outdoor classroom, consisting of benches and a cross in the courtyard by the main entrance. In constructing the cross, Matt was approached by the Religious Outreach Director to construct a cross to be carried into church for Good Friday Mass.

When it came time for Nick to do his project, he was unsure of what he wanted to do, but wanted it to be at Elder. He approached, Kevin Espelage, Elder’s Athletic Director, who gave him the idea to build a cross for the entrance to the Panther Fitness Center. “When I first sat down to draw up the cross, I thought it was way over my head and I would never get it done in the time frame I had,” said Nick. “I sat down with Mr. Espelage and Mr. Ruffing to layout the groundwork for the project, but I had several questions: Where would we find a tree? Where could we get it milled? Where do we work on a ten-foot-tall piece of wood?”

Nick’s questions were answered when Mr. Ruffing suggested they use the tree in front of the Donohoe Center, since it had to be cut down anyway for the new renovations. “Looking back now, finding the tree was the easy part,” said Nick. Now, to get the 200-lb tree milled! After doing some research, Nick and Kevin Espelage found two brothers, who just happened to be Eagle Scouts, who donated their time to this project by milling the tree. Elder allowed Nick and Don to work on the project in the horseshoe of the PIT and store it underneath.

“Mr. Dave Maher ’67 and my grandpa were the biggest assets to me when it came to working the wood and figuring out our dimensions and what color to stain the cross,” explained Nick. “Mr. Pat Hennessey ’57, a retired painter, also put in countless hours to help stain the cross.”

It was certainly a team effort to get the cross made. “This may turn out to be one of the most meaningful projects I have played a part in on this campus,’ said Espelage. “From the story behind the making of the cross, incorporating the iconic phrase from the gymnasium and the entire project matching our vision. I couldn’t be more pleased with the end result.”

As far as proud Grandpa Wetterer thoughts on this particular project, “This was one of my favorite projects that I have worked on. It’s not every day that you have the opportunity to follow a project from the raw material to the finished product. I’m very proud of my grandsons and their achievements as Eagle Scouts.”